Velomobile definition revisited
In the past few weeks, the velomobile group on Facebook has been discussing what constitutes a velomobile.  The group page describes a velomobile as:

A Velomobile is a human powered vehicle for daily use with a shell for comfort, weather protection and luggage space.

A velomobile, or bicycle car, is a human-powered vehicle (HPV) enclosed for aerodynamic advantage and protection from weather and collisions. Nearly all velomobiles are single-passenger vehicles. They are derived from recumbent bicycles and tricycles, with the addition of a full fairing (aerodynamic shell). Most Velomobiles have three or four wheels. Fully faired two wheel road going machines are included within the more general category "human powered vehicle" (HPV).

A number of aggressive posters seem to think that any 3 wheel vehicle with a shell pedals seems to fit the bill even if it requires a motor.   Some are designed that way from the beginning and some regular velomobiles are converted. So the question is: when does a velomobile stop being a velomobile?  Does an ELF with a 750W electric motor meet this requirement?

Including micro cars with pedal assist a velomobile is analogeous to calling a moped or e-scooters with mini pedals are a bike.  Mopeds are used by a different group of people, not cyclists and they have caused issues and as a result moped require plates and drivers license in many jurisdictions and there are moves to restrict e-bikes too.  I’ve never heard of a moped rider who converted to a regular bike unless it was by necessity.

In my opinion, a velomobile needs to be identified as a bike otherwise we may be subject to undue scrutiny and regulations.  This is very important because if these micro-cars with pedal assist are identified as velomobiles, riders of human powered velomobiles will be subject of more scrutiny to see if we have motors and we may find ourselves cut-off from MUP and bridges that are built for active modes of transportation.

As such, here are my criteria:

·      First, a velomobile is a human powered so an average rider should be able to operate a velomobile in human powered mode for significant distances aver varied terrain.
·      Second, the assist should not be more powerful than an average human and there are very few average riders who can sustain 250W of power.  If it is larger, it means that it is not an assist but the primary more of propulsion.
·      Third, it should have a shell that provides a significant aerodynamic advantage over trikes and other pedal powered vehicles;
·      Fourth, they have three or four wheel whereby they do not need to be balanced when riding or at a standstill.

The Left Coast Velomobile Gathering, one of the largest velomobile gathering in North-America recently took place in Oregon.  Approximately 10 velomobile took part in the event that lasted several days with rides of the Willemette Valley and HPV competitions.  By European standards this is a very small gathering but with the very large distances it is quite a large event. Participants had to drive several hundreds if not thousand miles go get there.  The winner of the HPV race was a home made Coroplast velomobile on an ICE trike other participants rode a DF, a Milan SL, a Milan GT and several Quest and even a Varna streamliner.

A very exciting video report was produced from the 6hr Loxton race part of the Australian Pedal Prix series.  The video is posted on You Tube https://youtu.be/km_TzTJmINg  It appears that other races in the series may also receive video coverage.

Daniel Fenn is currently working on a smaller and lighter DF for a small female rider.  This DF is narrower, lower and shorter and lighter than the regular DF.  The smaller velomobile may be used by a female rider to participate in long distance record attempt.  Maybe this will become a product available to other riders, that would be for very small riders.  .  The name of the new model has not yet been set.  There are a few names being mentioned like DFN (DF narrow) or DFs (like the small Evo-K).  I would prefer DFs since DFN could be misread as DNF or Did Not Finish, a term used in racing. 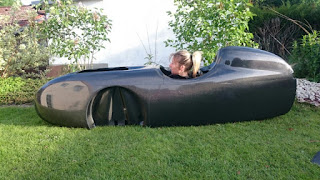 There is no mention yet of the make and model of the new rear shock for the DF.  Some people have indicated that they may switch their DT Swiss for the new shock if improvements are noted.

Work on the QuatroVelo is continuing at the Romanian factory, the wheel wells were installed in the shell along with the seat.  The next item on the work list is the trunk lid. 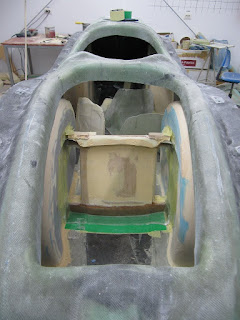 Wim Schermer is testing an aftermarket a support leg for the boom in his Quest.  The support made of carbon fiber, increases the stiffness of the boom, which results in less energy wasted due to flex of the boom and/or shell.  The support leg is made to fit the Quest/Strada/Mango.  If the test is successful, maybe the part will be made available through his e-store (Velomobielonderdelen.nl).

The new manufacturer Italian Dream Cycle showed on their Facebook page their second velomobile produced.  The photo with caption shows number one and number two on a tour of Tuscany.

We expected that the Marvelo would be making an official appearance at the LCVMG last week but unfortunately this was not the case.  I know Jon is working hard to finish the first production model and he probably ran out of time.  Let’s hope the new velomobile will make its appearance very soon.
Posted by Luc On The Go at 5:58 PM