First velomobile ride of the year

First velomobile ride of the year
On Saturday I drove to the first ride of my cycling club.  It was help some 2 hours away where the snow had mostly melted.  At the start the weather was foggy, windy and the temperature about -1C.  I had the only velomobile and that made some of the others jealous. 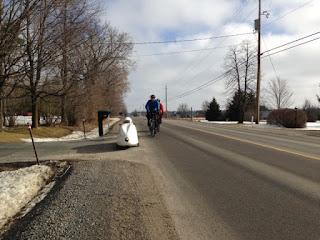 We rode mostly as a group but I would ride ahead and wait.  We stopped for coffee at the mid point and I was the instant attraction in the little town.  For some of the members it was also their first time to see the velomobile and they saw how fast and comfortable it was.

Unfortunately I will need to wait just a while longer to ride some more unless I travel a bit to find safe riding conditions.

It was also my first ride with the new hood.  As this was not a long ride and I did not encounter many different conditions, I can only provide some initial impressions.

What I liked: the ICB hood is roomier, sturdier and less noisy than the Schermer hood on the Quest, the visor was holding in place very well with the bungee clips and was it not shaking.

What could be improved: the field of view is adequate but much more restricted due to the large post where the lens is attached, I have the double Pinlock lens and it further restricts the FOV as only the middle section is double lens.   The ventilation is not as good and the side window was fogged-up most of the time even with the visor partly open.  In the cold and dry conditions the visor did not fog up at all.

My last post on four-wheel velomobiles appears to have been very popular and generated a lot of discussion.  This week one of my readers in Canada sent me a note.  Interested in purchasing a QuattroVelo, he contacted the government authority to ask f a four-wheel bike could be used legally in his province (Quebec).  The answer he received was not what he wanted; “Les bicyclettes à quatre roues ne sont pas autorisées à circuler sur les chemins publics, ni dans les pistes cyclables.” To paraphrase this answer since they are not identified in the regulations, four-wheel bikes are not legal on the road or even on bike paths.

I cautioned people that they should ensure the new type of velomobile can be operated legally in their area before they order, I think this is a warning to those who order without first inquiring.  Currently, I am not aware of any group making representations to change current laws and this may have an impact on adoption.   I know how long it takes to change regulations so it is serious work and must be done for each jurisdiction.  Is anyone out there willing to take up the challenge?

Already Daniel has shown some pictures of the modification process.  It is similar to the technique he used to create the DF-XL from the shell of a DF.  Already the front wheel wells have been made larger to accommodate larger tires.  Here is what we knw so far on the velomobile specs:

The DF-4 will be an original design that is somewhat unconventional.  First it will have 451 instead of 406 wheels all around which is a significant departure for velomobile designs.  All four wheels will get a 90mm  drum brake.  The velomobile will have a mid drive Rolhoff and a 10-speed short cage derailleur providing 140 gears.  It is not clear yet how the system will be designed and built. 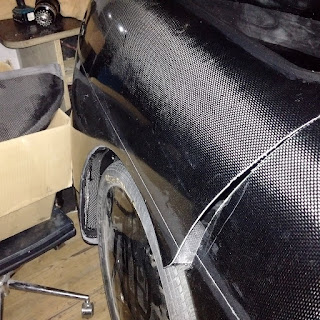 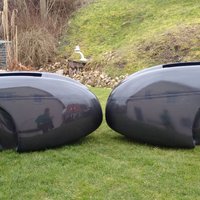 The shell will also be made wider and the wheelbase will also be longer at 105cm. The bike will have a left-chain along the frame, powering the left wheel only the chain will have maximum distance from your leg and torsional forces on the frame is reduced. This eliminates the need for a differential or freewheel thus reducing weight and space requirements.  Provisions are being made to provide a 500W electric assist motor to the right wheel.  The tail of the velomobile will also be flat to enable vertical storage.

It is expected that the development period would take approximately 6 months before production could start.  Ymte hopes that the prototype will be available in the not too distance future so they can start testing on the road.

Trisled
Trisled is offering a conversion kit for the old Tomahaws to update them to the new rules.  The kit costs under AU$2,000 will provide a completely new Chromolly roll frame, PETG windscreen, laser cut Coroplast body delivered in a flat pack as well as an instructional DVD.  Trisled estimates that there are about 200 trikes that could be updated.  For more information and order http://trisled.com.au/product/tomahawk-xl-conversion-kit/ 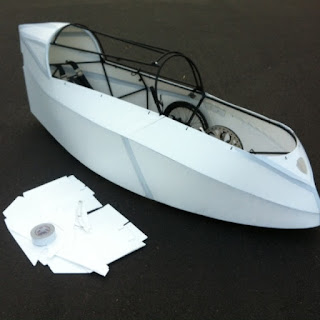