April brings a new arrival
I was fairly busy this week; I went to Collingwood Ontario to pick-up my new DF velomobile.  It took about 5 hours of work to set-up. While I physically fit in the velomobile, crank size is an issue, my feet and knees touch the shell.  The 165mm cranks were way too big and I could not even turn the crank, we changed to 160mm and I was able to ride the velomobile but the feet and knees were touching a bit. t Randy did not have 155mm in stock and has ordered some, he should get them in about two weeks.  It is clear that this is a velomobile that requires very close attention to the fit.  A big thanks to Randy for being there during a holiday. 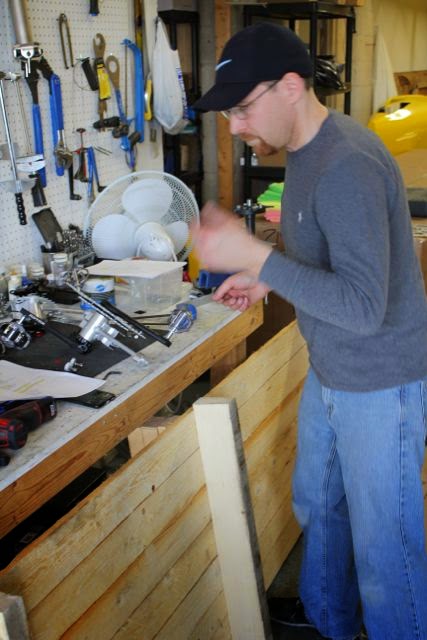 When I returned home, I went for a longer ride and found it was impossible to ride for very long so I started making a few changes.  First I removed the ventisit cover and my knees were not touching anymore but my toes were still touching, in fact a bit more.  When I came back home, I changed my cleat position and I finally don’t touch the shell but even minuscule movements sideways result in touching the shell.  I hope the 155mm cranks will address this issue.  Without the ventisit in my back, my helmet rests against the turtledeck and moves my neck forward and this restricts my breathing so I have to make a few more adjustments.  There is a bit of a creak when I pedal, I will have to open the hatch to see what is going on. 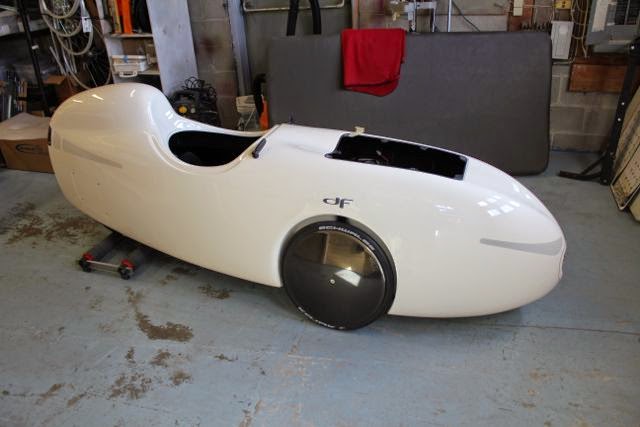 On the positive side, I am impressed with the suspension, the crisp steering, and the stiffness of the shell that transfers power to the wheel.  The finish is very good, I like the access hatches providing room to access the components.  The turning radius is such a change from the Quest and while it is very agile, I have found that it is possible to lift the wheels!

The weather is hardly cooperating, these days, we have cold and windy conditions with several days of snow and this is continuing this week.  I have to find my bent legs since I have not been riding a recumbent for the past six months, it will take a bit of time and better weather to improve my performance.

The guys in Romania are still working on the Quattro plug.  The top part will be laminated on the bottom part in the production process of the body.

In order to have access to the components there will be a hatch where the foot holes are, big enough to cut the footholes in the hatch. It can easily be replaced if the footholes need to be relocated to fit a new owner or replaced by a hatch with closed holes in winter.

The middle section of the body is accessible through the manhole and the tail through the luggage hatch, every part of the body can be repaired from the inside in case of damage.

Velomobiel produced a video on the difference between an elastomer front shock and the regular front shock.  The regular had a maximum travel of 35mm while the elastomer has 11mm travel.

So there was no 5 wheel DF Cargo, just an April fool’s prank from the guys in Dronten… who went to the presentation on April 1st?  BTW, Intercitybike is closed on Wednesdays!
On a more serious note, Daniel Fenn presented pictures of the new hood for the DF.  The hood is apparently roomy enough to wear a helmet.

Teething issues: Some riders have reported that the Zefal mirrors used on the DF have nickel plated screws that may be prone to rust in wet and salty conditions.  A stainless steel or nickel over brass solution is being investigated by riders.

There has also been some discussion regarding shifting issues of the front derailleur.  DF are equipped with two chainrings at the front and most riders have installed rings that have significant difference between the small and the large e.g.: 34-56 or 42-61.  Several riders reported chain drop while shifting and some riders have installed chain guides or chain guards to address this issue.  Apparently the standard front derailleur is Shimano Tiagra and some but not all Tiagra can handle a maximum 22-tooth difference therefore in some configurations, the front derailleur is at maximum capacity.  It appears that no Shimano front derailleur has more than 22-tooth maximum.

When my front derailleur was adjusted, the limit screw had to be finely adjusted by Randy, the difference between dropping the chain and being able to shift was approximately 1/8 of a turn.  With such close tolerance, it is not surprising that riders are having issues.  Another interesting fact is that the front derailleur will not shift when on rollers, you need to test on the road.

March Production
Intercitybike produced 8 velomobiles this month; four DF and four DF-XL.  The wait list is slowly coming down, it is now at 74 or approximately 9 months at the current rate down from approximately 84 a few months ago.

The Milan website is still under construction, it is surprising that a company’s window is shut for so long.  Websites, in my opinion is the principal way riders and potential clients learn about velomobiles, I find it difficult to understand why the company would not place a higher priority on having a continuous web presence which is usually the way riders find information on velomobiles.