No time!
Here is a post of information I gathered over the past few weeks some of them exciting and I want to share.  Unfortunately I have problem finding time to ride or write posts these days.

For several weeks I’ve been without my velomobile.  After a ride I noticed wear on my new tires.  It turned out to be a flat spot on my Schwalbe Pro One from a minuscule skid as I came to a stop on a small patch of sand over pavement.  At first I suspected that the wear was due to the alignment.  I installed the jig and checked the alignment and found that indeed it was off a few mm.

When I checked for the source of the problem, I found that the bolts had not come loose but I noticed that that the tie rod end bearing on the left side was pulled out of the socket.  This affected the alignment a few mm.  In fact the protection boot was holding the ball in place.  I checked the other side and saw that it was starting to come out.  I did not want to take a chance with trying to re-insert the ball inside the socket. 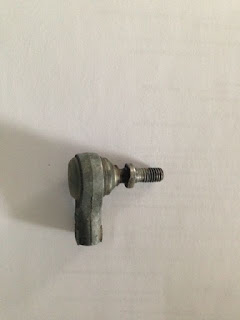 I tried to find a source in North America and found none that offered the exact same bearings off the shelf.  I contacted Ymte at ICB and he put some in the mail for me.  Postal delivery and customs make this process fairly lengthy.  After a few weeks I received the parts but currently my garage is full of building supplies, the DF is not easily accessible and I have not had the space or time to complete the repair.  We’ve had a very rainy spring and summer so far so nice riding days have been limited so far so it seems like I did not miss too much.

Several uncommon issues have prevented me from riding my velomobile this year.   It may have something to do with the poor road conditions I experienced early on.  Finding that my rims were cracked was one of these issues.  To address this, I ordered new wheels and rims from Ginkgo.  The new front wheels have the 90mm drums with heat sinks from Ginkgo.  I can use the wheels when I ride in mountainous regions when brakes have a tendency to fade after long and/or steep descents.  The wheels are noticeably heavier than those that came with the DF.  I hope this will not have a huge effect on speed, acceleration and climbing ability.  I also ordered replacement rims and spokes to repair the old wheels.  I am planning to use the repaired wheels for day to day riding.

Hopefully over the next week or so I will be able to fix the velomobile and go riding again.

It is a busy time at Drymer and Sinnerbikes  the company announced that they were appointed the official Milan velomobiles dealer for the Netherlands by the German manufacturer Raderwerk .

Models like the Milan SL, GT, RS and 4.2 can now be purchased via Drymer.

A few days after, pictures of the new Hilgo were released on Facebook.  The new velomobile is an improvement on the Mango, made of carbon fiber, it is lighter and slightly narrower than the Mango this will provide the ability to go through normal doors.  The first production Hilgo is undergoing testing before being released. The Hilgo already sports a new hood and will be available for 7650€.  Already there are hints of future versions of the Hilgo, possibly one with a Milan type entry hatch. 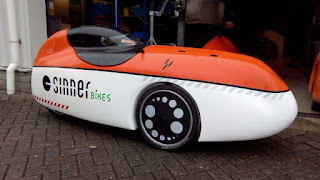 Daniel has revealed a new lighter swingarm for the DF weighting 660g complete.  It apparently can be retrofitted to current DF.  The new swingarm should allow the installation of larger wheels on the DF. 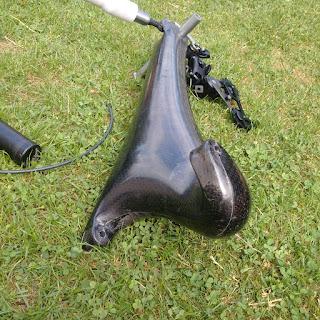 The German manufacturer seems to be making things difficult for velomobile users looking for fast tires.  After cancelling the popular Shredda size 406, the company just announced that the also popular Schwalbe One HS462 size 28-406 will no longer be available.  The tire competes with the Schwalbe Pro-One wireless of the same size.  It is unfortunate that the velomobile market can’t sustain these tires.  The BMX market is the main market for 20in (406) tires.

The Australian company appears to be making history one more time.  Trisled recently released pictures and a few details of their newest prototype.  The new velomobile is a significant departure from previous PedalPrix velomobiles.  The unnamed prototype appears to be a full carbon fiber monocoque Aquilla.  Currently it is my understanding that all PedalPrix velomobiles from all manufacturers have a metal frame covered with a shell.  Furthermore, the new tadpole velomobile apparently has front wheel drive and front wheel steering that is probably also a first in the world of tadpole velomobiles.  There are no details or pictures available yet of the structural or mechanical systems.

I am sad to report that brothers Andreas and Michael Byess have split up their business after 25 years.  The company has been a significant player in the velomobile industry.  Andreas will continue building the current Go-One models Evo R, K and Ks. Michael will not be involved in velomobile production, he will continue to produce manufacture precision parts.  Over the past couple of years Michael had released plans for the replacement of the Evo-K and Evo-R but Michael had indicated that the lack of resources probably due to slow sales of current models prevented the completion of the projects.  Andreas plans on making modest improvements to current models.

Ray Mickevius posted on BROL that several moldsfor producing velomobiles are available for enterprising individuals.  The molds are for the Cab Bike, Hornet and Team velomobiles.  The molds come with several parts including two working velomobiles. The asking price is C$9 500.  Ray had put Quest molds for sale and while a few people are interested, they are still available.
Posted by Luc On The Go at 9:51 PM