Swingarm swinging a bit too much!

Swingarm swinging a bit too much!
More velomobile problems.  I guess that this cycling season has not been good to me, the weather was very bad this year with a late start due to the snow lingering much longer that usual, this was followed by record rain and colder temperature.   As I mentioned previously, work has also kept me from riding regularly.  If that was not enough, I documented a few mechanical problems with my velomobile and some were a bit unusual and I had to wait for parts to arrive to address these mechanical issues.

This week I discovered another unusual problem.  A couple of riders have contacted me to say that they had discovered some excessive play on the rear wheel of their velomobile equipped with a carbon fiber swingarm.  I was a bit intrigued so I checked mine and I saw significant play. I can move the rear wheel more than more than 5mm from side to side.

After looking at different possibilities like a loose swingarm, worn wheel bearings, worn axle, I was able to pinpoint the problem.  The glue holding the bushings inside the swingarm that hold the axle appear to be failing.  I removed the wheel and cassette and reinserted the axle and when I put side pressure on the axle I can see the bushings move while the glob of glue appear to stand still. 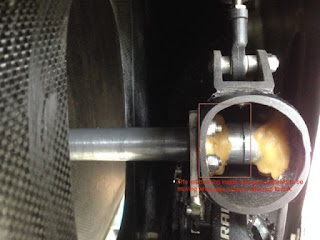 After an exchanged of e-mail with ICB, I’m sending the swingarm to Europe to be fixed.  Ymte also confirmed that there have been a few other cases where the same problem occurred.  I will be visiting Dronten soon and will bring back the swingarm home.

One more issue I’ve discovered is the mounting point at the top of the rear shock.  The bolt holding the shock is starting to make the hole in carbon fiber a bit bigger even if the bolt is properly tightened.  I think that there should be a grommet to support the bolt on each side of the carbon fiber tube so the bolt never comes in contact with the carbon fiber.

As mentioned previously, I will soon visit several velomobile manufacturers in Europe.  I will report on my findings upon my return.

Velomobiel introduced the Quattrovelo+ (orange one) next to the standard Quattrovelo. The new model is larger than the current Quattrovelo and offers 2,5 cm more space for knees and 1,5 cm for feet. It is suitable for riders taller than 185 cm or those who have longer legs and larger feet. 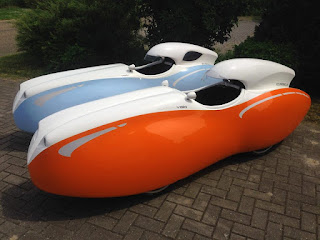 After a few quiet months, designer Daniel Fenn gave a cryptic update on the DF4 project.  It looks like he is reconsidering the 1 wheel drive and is working on a velomobile with traction on both rear wheels… unless it is both front wheels!  Daniel indicated that the new velomobile should still be lighter and faster than the QuattroVelo and Quest.

A few weeks ago I mentioned the new lighter swingarm that Daniel Fenn recently designed for the DF.  A few more details have surfaced.  The swingarm will be a bit smaller enabling the installation of a larger 622 wheel but restricted to the use of a narrow tire that is probably 28mm or less.  The swingarm will have a rounded end to allow different cable routing for other derailleurs. This was necessary since SRAM discontinued the 10-speed XO.  Bearings currently holding the swingarm and connecting to the two velomobile mounting points will be replaced by lighter Igidur bushings at mounting points (which might also change a bit).   The aluminium axle bushings will be replaced by a solid carbon sleeve should solve the problem of glue not holding.  The swingarm could be retrofitted to most DF but may require substantial work to be fitted-in.  The swingarm layout is fairly complex will probably go into production in the fall-winter timeframe.   Price has not yet been set and will be based on production cost.

Saukki produced a video on his participation in the Finnish recumbent championships.  In addition to Saukki’s performance, there were a number of others who did very well too.  Of particular note Tero Haapanen in his DF velomobile who dominated the events including a top speed of 81km/h on the 200m flying start.

You can see the full results here: http://www.rrfi.fi/en/#portfolioModal4

Schwalbe has published the 2018 catalog https://www.schwalbe.com/en/catalogesflyer.html of particular interest is the arrival of the Pro-One 28-559.

While not confirmed, it looks like the old Quest molds are going to the American Midwest.  Stay tuned!
Posted by Luc On The Go at 9:06 PM